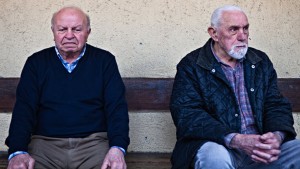 When John Fenamore and David Clamup sat next to each other at a home insecticide disposal lecture 50 years ago, they had no idea it was the beginning of a quiet relationship that would culminate in marriage 49 years later.

“I didn’t notice him at first,” said Fenamore, the retired CEO of Speedy Muffler. “Then Dave accidentally spilled a container of DDT on me. I said, ‘Hey’ and he said ‘Sorry’.”

Clamup, a semi-retired metal detector repair technician, remembers that moment as if it were yesterday. “That’s right. I said, “Sorry.”

The two quiet men immediately sensed a chemistry between them and started seeing each other on a regular basis. For the next three years their conversations consisted of “yup,” “nope,” “fine with me,” and “why not?”

The couple’s close and loving relationship is quickly apparent. They never look at each other and easily complete each other’s moments of silence. Asked if they could describe their husband’s eyes, both men said, “two.”

Fenamore and Clamup started living together in 1967. John remembers fondly, “Didn’t say a word to each other till 1973. Good times.”

The silent partners were finally able to marry in New York last year. Their wedding announcement read simply, “We said ‘I do.’ We’re done.”

Asked how two people can remain in a committed relationship for so long while hardly talking to each other, Clamup shrugged, “Don’t have much to say.”