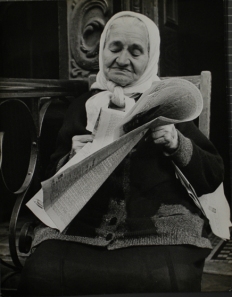 Camila Montalban, the world’s oldest introvert, has died in Bel Air, California. She was 118 and passed away while doing what she loved best, staring quietly at the ceiling.

Montalban, who attributed her longevity to sleep, eating healthy food alone, and never revealing her address to countless relatives, died at 10:38 a.m. Wednesday. She collapsed while listening to a Meals on Wheels deliveryman drone on endlessly. She never regained conciousness.

Camila was born on August 2, 1899 in San Diego, California. Her father was a Maytag washboard repairman. Her mother was an ESL teacher who taught recent immigrants Spanish. She didn’t speak her first word until age 12, later explaining, “I didn’t have anything to say.

Montalban was the member of Chula Vista Community College’s first graduating class where she majored in housewifery and minored in gazing contemplatively at sunsets.

In 1919, Montalban married Leo Rezdin, a talkative used buggy salesman. They had five children, one of whom she enjoyed conversing with. When not pretending to listen to her husband and other kids, she enjoyed rehashing arguments in her head and anxiously waiting for parties to end so she could go home. A history buff, Camilla founded a club that researched and re-enacted famous moments of silence.

With Camila Montalban’s death, the title of world’s oldest introvert now belongs to Takeo Fukuda, a 112-year-old retired male model and the only World War II Japanese solder who refused to surrender because he preferred the peace and quiet of jungle living.