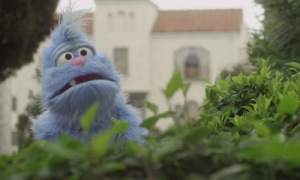 Sesame Street is set to unveil its new introverted character, Solomo. “We thought it was time to address the large number of kids who prefer to spend time alone reading or playing by themselves rather than seeking companionship with other kids,” said a Sesame Street spokespuppet.

Solomo will encourage introverted children by:

In addition to being the first introverted character, Solomo will also be the first Muppet to shut his bedroom door so the camera doesn’t invade his privacy.