Ashley and I had been dating for twelve and one half hours before deciding to move in together. Minutes later we were in lock-down.

In retrospect, we may have rushed things. It’s now been five months and I still haven’t gotten used to her whistling through her nose while she flosses her teeth. And for some unexplained reason, she seems irritated by my yodeling during sex.

I realize it takes time for couples to get to know each other, but have we jumped the cohabitating gun?

Living together often gets off to a rocky start, but your differences may not be insurmountable. Just because someone whistles while they floss shouldn’t make you ignore their better qualities, like healthy gums. And who hasn’t yodeled a tune or two while in the throes of passionate lovemaking?

The important thing to remember is love conquers all, except in my case, getting use to a cyborg that processes data with its mouth full. There are, after all, limits to everything.

I’m dating a guy who is perfect in almost every way except for one thing: He doesn’t believe in wearing a mask — anywhere. He thinks it’s a violation of his constitutional rights, plus he loves catching insects with his tongue. He claims they’re a great source of protein.

His refusal to wear face covering has already cost him nine jobs including four as an operating surgeon. I know he’s wrong, but every time I threaten to leave him he surprises me with a romantic dinner of broiled crickets. After that, I’m putty in his hands. Should I give him another chance or find a more responsible partner who doesn’t bug me.

So you’re worried about ending a relationship with a selfish man who isn’t concerned about transmitting a deadly disease; who catches insects with his tongue; and whose idea of romance is serving you a plate of dead insects?

Give me a call. I’d like to introduce you to my sister’s no-good, unemployed android that still lives in her basement.

Robot Woman is a friend and colleague of Ben Alper who writes for late night talk show hosts, comedians and others. He is the author of “Thank You for Not Talking: A Laughable Look at Introverts.” 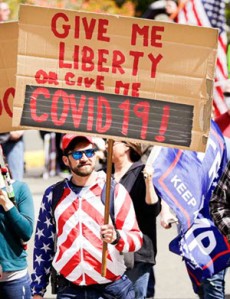 Thank you, amateur legal scholars who’ve enlightened us about rules and regulations that violate our Constitutional rights. Without you, how would we know:

When it comes to violating our most basic human and Constitutional rights, our overreaching government is just getting started. 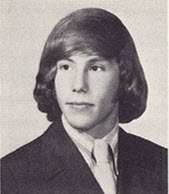 Ben Alper writes for late night talk show hosts, comedians and things. He is the author of “Thank You for Not Talking: A Laughable Look at Introverts.”

I realize that every voice in a democracy should be heard. But should we respect every comment, cry and groan?

And what was this guy, who obviously cares about election procedures, thinking about while polishing his banister? It’s certainly something to ponder the next time your caressing hand so gently inserts your vote into a ballot box.

This is not to imply that self-pleasuring people cannot have valid opinions about important issues of the day. In fact, I have to give this man some credit. Many people are too lazy to even vote. This bishop choker not only attended the meeting but “took over the single screen shared among commission members, numerous state and county election officials and members of the media.” Less civic-minded citizens have skipped elections to stay home and wax their cars.

Maybe it’s time we start giving some — not all — public turtle burpers their due. Some may have deep-seated problems that require tons of professional help. That does not mean, aside from their uncontrollable libidos, they aren’t standup citizens who care about their country.

The next time your online city council meeting is interrupted by a heavy-breathing man cuffing his carrot, don’t be outraged, don’t be repulsed, don’t insist the self-abusing scoundrel should not count as part of a quorum. Simply look away and say, “Thank you for your service.”

Ben Alper writes for late night talk show hosts, comedians and things. He is the author of “Thank You for Not Talking: A Laughable Look at Introverts.”