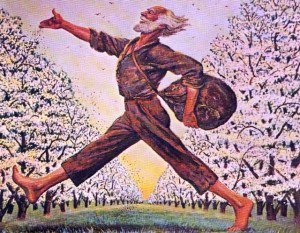 Johnny Appleseed (born John Chapman September 26, 1774 – March 11, 1845) was an American pioneer who introduced the country to apple trees and the introvert lifestyle.

Although legend paints a picture of Johnny wandering the countryside planting apple trees, he did much more. He introduced early America to a brooding behavior that would change and aggravate the nation forever.

Beginning in 1792, Johnny headed west to plant apple trees and be alone. Today, Native Americans from the Iroquois tribe in New York tell the story of a man they call Scatchwhoa (translation: Man who dislikes small talk).

After growing bored with the Iroquois, Johnny moved to Pennsylvania. He continued traveling into the Ohio Valley country and Indiana. Each year he planted apple seeds for settlers who would’ve been more grateful had he not come across as aloof and conceited.

Johnny always carried a leather bag filled with apple seeds, making him the first American to sport a man purse. He planted apple seeds wherever he went and was soon known as the “apple seed man” — a name he didn’t mind it since it was preferable to “metrosexual apple seed man.”

Johnny enjoyed living in the woods by himself, although he often became exhausted communing with nature – particularly when chipmunks would not stop talking.

Johnny never married. He did have a long, intense relationship with a woman known as Patricia Peach Pit. In the end, it was not meant to be. “We tried to make the relationship work,” Johnny wrote to his brother. “But we’re apples and peaches. And she’s not interested in being just a cross-pollination buddy.”

Johnny died peacefully on March 18, 1845, having made the fledgling country apple-friendly and more open to eccentric guys living by themselves in the woods.